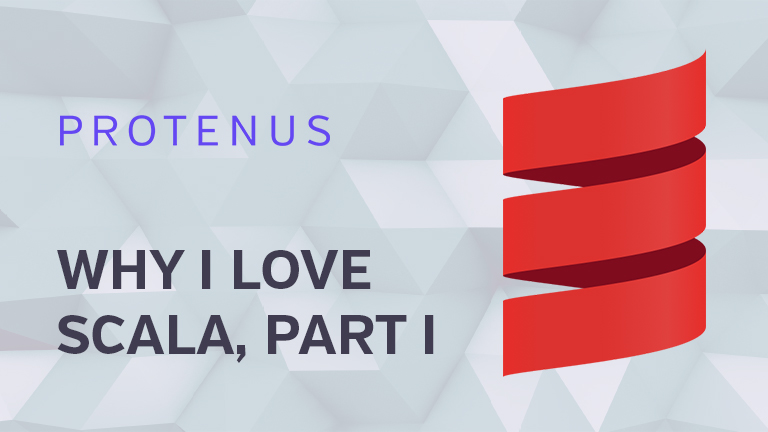 Why I Love Scala, Part I

While looking for an internship in late 2015, I stumbled across Scala, and was intrigued. Why would I want to use it over Java, especially since Java 8 added lambdas and streams? What made it better? I decided to try it out the following spring break, and I was instantly in love, so much so that I started contributing to the language the next year.

In 2018, I joined Protenus so that I could work full-time on Scala-based backend engineering projects. At Protenus, we use Scala for a variety of reasons that mostly boil down to reducing development time and the number of bugs in code. While many languages share some of Scala's features, few share the majority of them, making Scala unique in ease of development.

Scala is a flexible language with the benefit of compile-time type safety, the strengths of both object-oriented and functional programming paradigms, but without much of the boilerplate required by many other languages with compile-time type safety. It also has features (such as higher-kinded types) that  allow users to write more powerful abstractions and reuse more code, but those features are in some ways more advanced, and the topic of another blog post.

Scala is strongly typed, and its types are checked by a compiler before the code is executed. The compiler's type checker prevents you from passing the wrong type of argument to a function, or performing an operation on the wrong type of object, before any code is even run. While Python is touted for its simplicity, its lack of type checking before runtime (at least by default) means that many mistakes that Scala prevents can make it into production code.

Scala's design is a fusion of functional and object-oriented programming. The object-oriented aspect gives Scala the strengths of inheritance and encapsulation, as well as the ability to use the vast ecosystem of Java libraries, at least when running Scala on the JVM.

Scala's functional aspect means that most data is immutable (unchangeable once created), and operated on using functions that don't modify existing data structures. Many of the Scala library's core data types do not allow data modifications and have APIs that return new structures. This design philosophy allows developers to reason about smaller pieces of code, making development easier. Additionally, immutability allows data to be shared safely without copying it, which can reduce memory use.

Scala has many features that  reduce the amount of boilerplate code you need to write, speeding up development and reducing the tedium experienced by engineers. These features range from generating redundant methods to removing the need for excessive type annotations to implicitly calling code for you.

Case classes are a way of representing immutable data or state. A case class consists of a fixed number of fields, and the Scala compiler automatically generates several methods methods for it, including: